Dolphins are the Crane People of the Sky 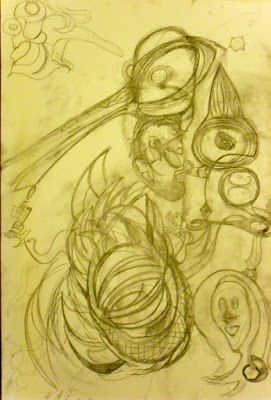 This is what's being painted right now. The title came just as the drawing, I open up and it streams through. It may change as I paint it, I get to know it and understand the message. 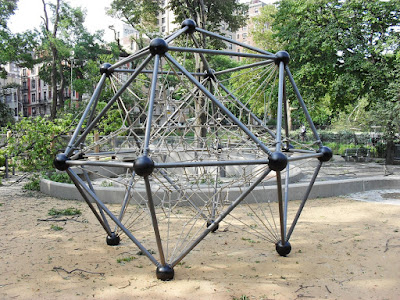 This is the icosahedron, a feature in the new children's playground in Central Park at 100th St. and Central Park West. This is some sacred geometry and I am fascinated that its just hangin in the park. Love it.
Posted by East, West, and In-Between at 8:06 PM No comments:

I was aboard a whaling vessel. Its a large community of people on a large ship with different tiers of responsibility. The captain leads the show, and the first mate follows his lead. Through day and through night it is men at sea. Whales are harpooned and processed. At times the sea is rough and waves crash down on me. At one point I am holding the harpoon which I'm afraid may pierce someone. A friend on board told me he made fresh coffee so I went for some. I passed men sleeping in bunks and finally reached a modern cafeteria. I got some coffee. There were many different people in this cafe. One woman was telling another how the last whale was harpooned there was terminology for where it hit, whether the whale drowned to death or whether the harpoon severed a vein and it bled to death. I went back up to deck with my coffee. It was light out. Groups of people were eating golden whole fried fish and burgers. One person said something.. to me?.. that made me think of Jersey City..."this guy....jersey city state...." I reach the bow where I see two whales. I think that they decided to split up so as to save one of them. I realize its a mother and calf. The ship drives between them in order to separate them. It goes for the mother and the calf circles around to get to her. They harpoon and tether both whales. The captain yells out to the supporting people to find out whether there is even room in the containment units for the newest bounty. At that moment I look at him and tell him if there is not, he should throw himself in. The first mate flips and begins yelling at me. The captain says relax, looks at me and says leave this ship now. I turn around and leave the ship. On my way off the boat a friend stops me. What happened and I tell them. They look at me with up set eyes and tell me that he has every right to throw me off. I shrug my shoulders in response. Another friend stops me and I explain again. This time I share how I could feel the fear and terror of the whales.. Emotions, the element of water, you have no idea to what degree they feel. There is no more food or people on the way out. I was hoping I could snag one of those fried fish.
Once I leave the ship I am on land and scenes pass in which I am not involved but a watcher, like television. It showed wind surfers who would leap high at sea in order to check for whale sign, they would then notify the ships. The scene then showed how on occasion these individuals were smacked out of the air and then beat to death by the flukes of the whales that would catch them . Then on the other side of me was a scene of a doctor/scientist who was running tests on a young boy who appeared to be mentally retarded or autistic. He had electrodes hooked up to his head and he was given what looked like puzzle tests while the man in the white coat wrote things down on his clip board. I awaken.

My Awareness:
The sea of the unconscious... Water is the key. When you begin to honor water, you begin to honor the element that links every single living thing...our consciousness.. our dream.. our spirit.. When you realize that your voice and your intention programs water you realize how much goes on between your consciousness or sentience and the water.. After this dream I realize that whales and their songs are programming the water. The nature of the whale is communicated through its voice and its song. I don't know much about whales but I know about whale song its popularity and its dreamy hypnotic nature. Whales are gentle singing giants of the sea. They sing life into the water. Like consciousness, like dreams, water is the stream that connects us all. The water in our own bodies is linked to this. We are not separate from the water and the horrific practice of whale murder that my dream state took me to experience. To some degree I now understand that the murder of these beings is killing the water in our own bodies ...in our own consciousness. Ostensibly, we are killing ourselves. The doctor in the lab coat, is the authority declaring what he will designate this boy who is unlike him and therefore inferior.. the hubris.. the disrespect.. it's that same sense of entitlement that is destroying this world, the water, the oceans, the whales, ourselves.
Posted by East, West, and In-Between at 11:58 AM No comments:

new web site is up.

Posted by East, West, and In-Between at 1:19 AM No comments: 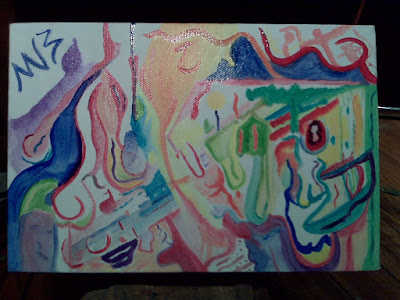 6.9.09 Thunderstorms.. Lightning.. Full moon. Central Park to the Pier on Christopher St., back to Amsterdam Ave. A little out of focus, but you've got to love the cameraphone.
Posted by East, West, and In-Between at 9:11 PM No comments:

"Pacific"
Painted on Pacific St. in Brooklyn.  The house was directly across from a cathedral and was a two family owned by the Haitian family above.  I painted many acrylic paintings in this space during this period.
Posted by East, West, and In-Between at 8:19 PM No comments:

I work at a restaurant.. I absorb a lot of energy. I take a lot of orders. I service a lot of people. This is the day the health dept. visited us. HIGH ALERT! we ... the restaurant passed.. It was pretty funny though watching, and partaking in the comedy that ensued. I was coffee station that morning. So this was the day where every milk container in the mini fridge needed to not be expired. A cause for concern. All clear. A friend mentioned that he actually did it last night and made sure that nothing was in there. He had found something and tossed it. Thank God.. 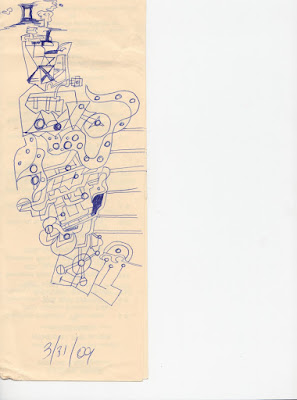 It was a long day.. I didn't have a chance to draw until I was actually waiting on tables.. I could draw because there wasn't much to wait on. It wasn't very busy. Health dept. in the morning, slow afternoon, maybe a bit busier later. 3/31/09
Posted by East, West, and In-Between at 8:43 PM No comments: 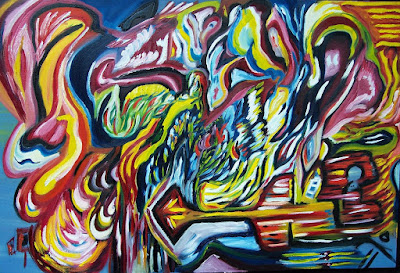 The intensity of reintroducing myself in the natal streams to procreate and die, partaking in the cycle of life.  Tenafly, NJ 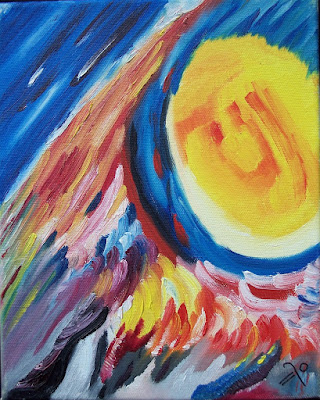 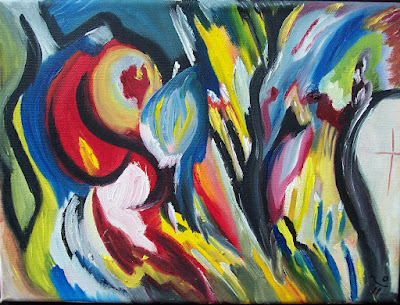 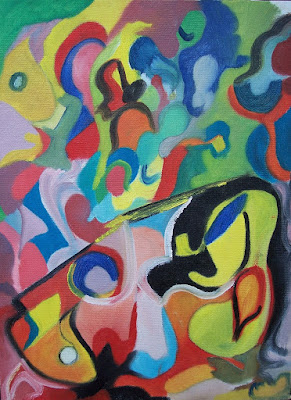 Painting is brought back from the desert.  Santa Fe, NM 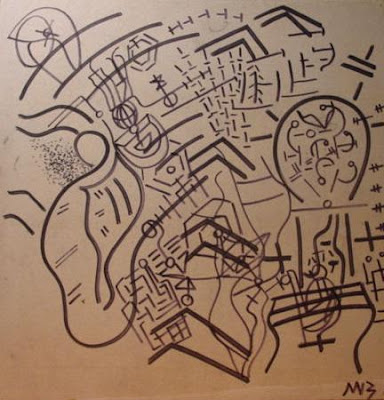 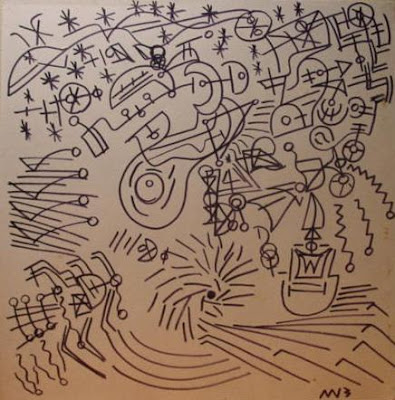 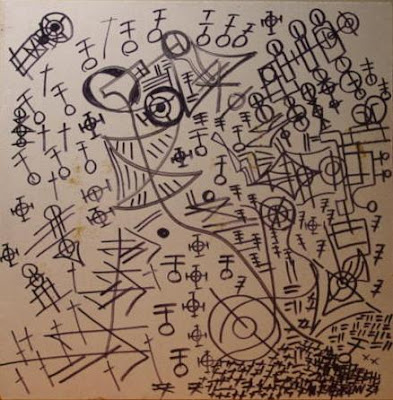 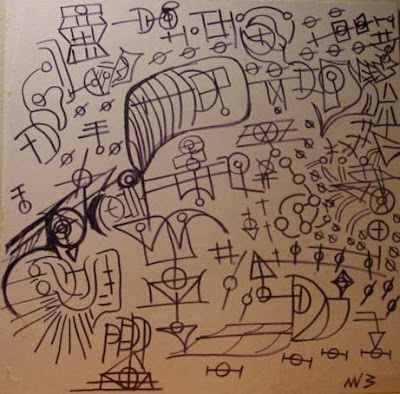 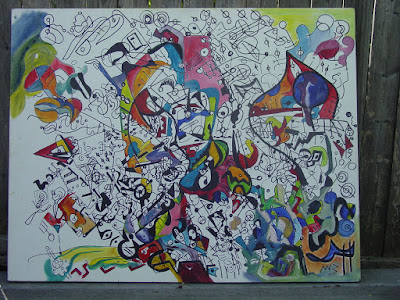 East, West, and In-Between
My journey has taken me through the corporate structure and then way outside of the box into consciousness studies, spirituality, and alternative healing techniques which involve art, creativity, and plant medicines. I honor the heart in all beings and work to stay centered throughout all of the contemporary chaos that currently surrounds us. My art is spiritual and heart based, emotionally intense, reflecting the truth and intuitive heart connection which guides my life. I now live in Portland, Oregon.